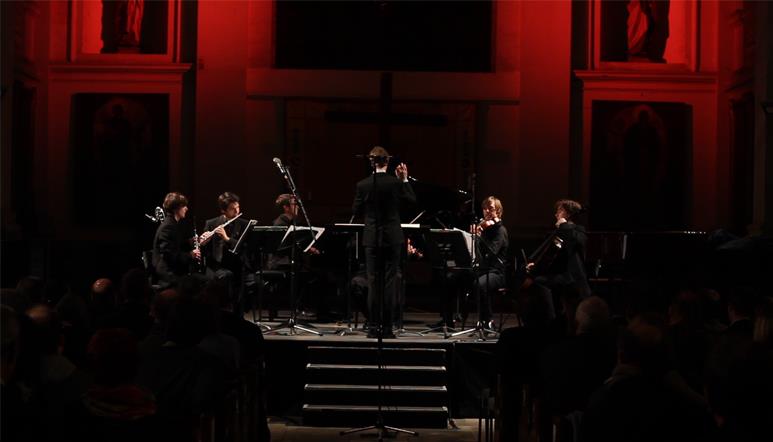 Some people can’t see a mountain without wanting to climb it. The players of Hugh Brunt’s terrific London Contemporary Orchestra give me a similar impression: that they are game for any avant-garde musical challenge, the tougher and craggier the better.

Opening what looks like being ten days of dizzying eclecticism at the Spitalfields Music Winter Festival in East London, the young players tackled not one daunting mountain but three — the second never scaled before. This was Martin Suckling’s Violin Concerto, commissioned by London Music Masters (via an ingenious “buy a bar” fundraising campaign) for the fine Polish fiddler Agata Szymczewska, who tore into its fiendish challenges with huge energy and technical resource. The piece is titled De sol y grana — a reference to a Machado poem in which the poet compares his songs to bubbles glinting scarlet in the sunlight. Here the bubbles become musical segments, nine of them, some languorous or even lugubrious, others violently eruptive.

Rather than being the dominant force, the soloist is first among equals, fizzing in and out of weirdly imagined string and wind textures that are sometimes soured by quarter-tones. Disconcertingly, Suckling is fond of piling up disparate ideas or layers, then moving on. Yet, under trills or quivering oscillations from the soloist, the strands are finally gathered into a superb finish: a birdsong-like crescendo of ecstasy.

There was more virtuosity later, in Gérard Grisey’s magnum opus Vortex Temporum. A spectral-music pioneer who died in 1998, Grisey wasn’t the best advocate of his own pieces. It’s wisest to ignore his programme notes, with their mind-numbing references to “stretched disharmonics” and “sinusoidal waves” and simply let the music — volcanic, clangorous, hypnotic, nightmarish or eerie — assail or seduce you. The pianist Antoine Françoise, required to deliver fistfuls of notes (or sometimes simply to slam his fists on the keys) was rightly acclaimed at the end. But under Brunt’s immaculate direction the entire ensemble was heroic.

And I am delighted, too, that this rising new generation is rediscovering the soundworld of Claude Vivier. His Bali-inspired Pulau Dewata — hard, percussive, jangling refrains organised according to ancient modes — was a reminder of what a genius the world lost when the Canadian was brutally murdered in 1983 at the age of 34.

There might have been mince pies in the interval of the first evening concert of the 10-day Spitalfields Music Winter Festival, but there was nothing cosy about this bracing programme of music in Shoreditch Church by Claude Vivier, Martin Suckling and Gérard Grisey, performed by the fiercely bright young things of the London Contemporary Orchestra under conductor Hugh Brunt.

Suckling’s de sol y grana, a violin concerto commissioned by the music charity London Music Masters, was here receiving its first performance. It was inspired by Antonio Machado’s poem, in which songs become bubbles, floating away on delicate, short-lived trajectories, refracting colours as they go. It’s a delicate little conceit, but one that gives little hint of the sometimes forceful nature of the work.

Its opening section was tautly controlled and powerful, soloist Agata Szymczewska dispatching volleys of notes with concentrated virtuosity against a feverish orchestral backdrop.

The technique and imagination on show throughout Suckling’s score was enormously impressive, but the piece was most memorable in the later sections. An elegiac strings-only passage, played in heavy, long bows, made way for a brief, unexpectedly moving duet, Szymczewska’s trills flitting playfully above a melancholy bass flute line. A tense build-up, with the violin increasingly insistent, led to the work’s throwaway conclusion – a final bubble gently popping, one imagined.

Suckling’s new work seemed a great deal more composerly than the other works on the programme. But it worked well after the rhythmic insistence of Vivier’s Bali-inspired Pulau Dewata, which, scored for “variable ensemble”, was here shared between violin, cello, percussion and piano. Brunt drove the rhythms hard, and the vibraphone-and-piano textures often seemed more reminiscent of urban frenzy than an exotic island. Leavened by occasional lyricism, though, Vivier’s recurrent patterns were hypnotic but never numbing.

The arpeggios of Grisey’s remarkable Vortex Temporum swirled hypnotically after the interval, too, but the Frenchman also allows himself daring amounts of time and space in this longer work. There’s a formidable solo for the subtly detuned piano (dealt with magnificently by Antoine Françoise), as well as clock-stopping spectral experimentation elsewhere. Brunt controlled it all brilliantly, and his players excelled themselves.